In 1985 the Suzuki GSX-750R appeared, rightly regarded as the first road-legal production super sports bike. It kicked off a new generation of super sports bikes such as the Kawasaki Ninja, the Honda VFR and CBR and the Yamaha YZR. BMW broke the 100 hp barrier for the first time with the K 1100LT road bike, while the first big trails appeared: Honda AfricaTwin, Yamaha Super Ténéré and CagivaElephant. The custom bike was a real craze with the Yamaha Virago, the Honda VF 750C Magna and the Suzuki LS 650 Savage. Not forgetting the classic Yamaha iversion, Suzuki Bandit and Yamaha SRX. These stars of the 1980s and 1990s, the youngtimers, are now legendary. It is time to rediscover them by reading this book which pays tribute to them. 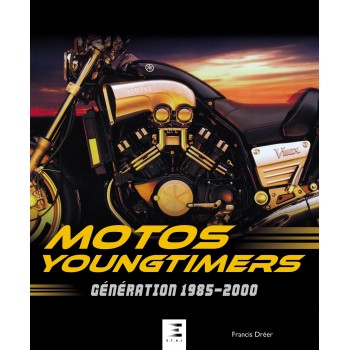